The big news today was that Twitter has accepted Elon Musks offer. Twitter doesn’t make it easy but I’ve always tried to avoid only following people who think exactly like I do. It seems that my timeline is about 50% feeling really good about the news and the other 50% are talking about migrating to Mastodon or crawling back to IRC cave with the other luddites. (I’m permanently in that lovely cave myself so I can make fun of these luddites!)

It’s only been a few of months since I last watched in disbelief as many people were loudly leaving Spotify because some big corporations and elite (even the White House!) were actively spreading disinformation about Joe Rogan in order get him cancelled. Full disclosure: I listen about 50% of Joe Rogan episodes. I strongly disagree with many of his views but I have to say that almost everything that was said about him was either wrong or purposefully quoted in a misleading way. It’s actually super easy to see if you just focus a bit; one side is honest (albeit sometimes intentionally trolling and/or attention-seeking), the other side twists the message and uses traditional propaganda tactics. It’s really very transparent.

The “funny” thing (I’m not sure what would be the right word here because it’s so tragic) with the Spotify mass migrations was that many people –including Neil Young– jumped over to Amazon, which by almost any measure is much worse than Spotify! Among other things they treat their workers horribly and they go to extremes to avoid paying taxes. In my opinion, at the end of the day, the Washington Post (owned by Jeff Bezos) does much more controlled damage to the society than Spotify does.

But back to Twitter and Mastodon. If Elon Musk buying Twitter causes some people to jump off it, I think it only does good for the whole Web. It’s sad that many still don’t seem to know or understand how easy it is to use multiple sites and apps instead of just hanging at one giant one. It’s good to have alternative communication platforms and different views about things. If these knee-jerk reactions help people to find their way off from the great big walled gardens, it’s new positive for the whole World Wide Web. In the end, even the Spotify migration was probably good for the music industry.

Lastly, I don’t want to come off as being somehow different or better than anyone else. I have my own opinions and pet peeves which get me going. Not too long ago I reacted pretty strongly when 1Password announced some kind of a partnership with some crypto (as in -coin and not in -craphy as they should have) thing which just wwas the last straw for me and I cancelled my account just minutes after reading the news and then virtue signaled about it on Twitter. I’m just like everyone else, but I think I just value free speech more than most.

I had an idea to add tweets from registered DJs to the site homepage to give it more fresh and dynamic feel. So I hacked together a small script that fetched latest tweets from all of the DJs using Twitter API. After taking a quick look of the data, it was quite obvious that in practise, this wouldn’t be a very good addition to the homepage.

This is what I saw: 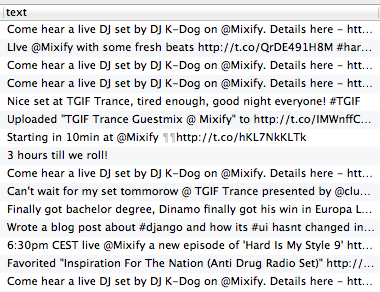 When you think about it, it makes sense. Most DJs aren’t really interested in Twitter or other social media (except sites like SoundCloud and Mixcloud, which in contrast are very important and much used), they just feel that they need to be there because everyone else is and promoting yourself is hard. Their tweets are mostly just plain adverts of upcoming gigs and very little actual content. DJs create their content as music, not as tweets.

This is actually a good example why it’s important to have deep understanding of the field in order to being able to create good services for it. I’m not yet very familiar with the whole DJ scene yet, which is why I often ask dumb questions from experienced DJs who have been in the business for decades. But I’m learning every day.

Twitter doesn’t have an official Python client for it’s REST API (which requires authentication for every query) but there are plenty of third party options. One of them is python-twitter, which is implements full API but lacks a decent documentation.

Here’s a full and working code on how to get a list of public tweets for a given screen name and an example of how to convert tweet dates from strings to datetime objects:

One last exotic error to be aware of is an exception which says “Timestamp out of bounds”. It means that the environment clock is too far away from the actual time. For example if you’re running a local virtual machine which messes up its clock when the host goes to sleep, you might see this. (Note to self: how about finding a permanent fix for the god damn clock.)