I skipped most of the sessions for the day as they didn’t seem even remotely interesting to me. But, the ones I did attend where really good.

Last nights partying kept me pretty much in bed for better part of the morning. Descriptor tutorial by Raymond D. Hettinger was very good and I think it was actually the first conference tutorial ever that actually teached me something about programming and Python in general.

The keynote talk for the day was something that absolutely blew my mind. Hans Rosling talked about Gapminder and how statstical data and databases should be free. First thing that crossed my mind when listening to him was that “I wonder if Adrian Holovaty has ever talked to this guy — they’d have much to talk about”. If you havent heard about Gapminder or Hans Rosling before, you should definitely see his talk on last years TED conference. In Django-terms, thats some cool shit 🙂 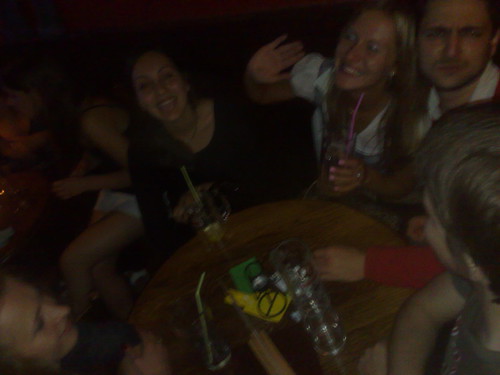 After Roslings inspiring keynote there was the conference dinner. We ate well and headed again to down town Vilnius. (Todays dream team was Edgars, Nicolas and me.) The two girls from last night showed up as they had promised. We had great time with them for a couple of hours untill they left early. We stayed at the bar and eventually hooked up with three cute Lithuanian girls. Lots of dancing, beer and fun until the bar closed at 3 am. What a great night — again!