For me, the main theme for the third and last day of the conference was Django. Day started with a session by Honza Král about Django newforms admin, which gave me a pretty good idea what I have to do in preparing for the migration to the new admin interface. Later on the day I had many interesting discussions about varions Django-related things, including ideas about having something like Django release party here in Europe, too. 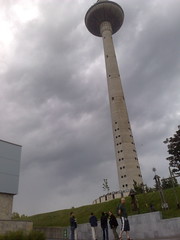 Turns out there are quite a lot Djangonauts here in EuroPython, we just arent organized very well so most of us don't know about each other. Lively after-conference discussions about career choises, Web Design and working with Django in general were definitely the high point of the conference so far.

A couple of hour later on the evening, decisions about quiet evening at the Sky Bar (at the 22nd floor of the conference hotel) were forgotten and, again, we headed for the old town. This time we ended up in some night club and, well, yeah, we had a great time :)